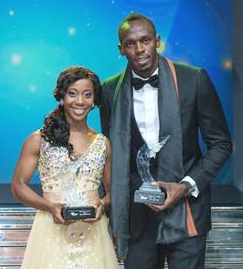 IAAF World Athletes of the Year Usain Bolt and Shelly-Ann Fraser-Pryce are among the nominees for the 2014 Laureus World Sportsman and Sportswoman of the Year awards.

Bolt, a three-time winner of the award and the recipient in 2013, leads the menâ€™s nominations along with fellow double world and Olympic champion Mo Farah. Outside of athletics, the other nominees are US basketball player Lebron James, Spanish tennis player Rafael Nadal, Portuguese footballer Cristiano Ronaldo and German formula one driver Sebastian Vettel.

If Bolt were to win, he would tie the record of four Laureus awards, currently held by Swiss tennis player Roger Federer.