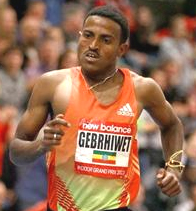 The New Balance Indoor Grand Prix, anÂ IAAF Indoor PermitÂ meeting, on Saturday will feature world and Olympic medallists in the 3000m, two miles, one mile, and 1000m, as well as an attack on the world indoor 4x800m record â€“ a mark set at this meeting back in 2000.

The meeting, which has traditionally centred on strong fields and occasional record attempts in the middle and long distances, is now in its 19th year at the Reggie Lewis Track and Athletic Center in Bostonâ€™s Roxbury neighbourhood.

Much of the pre-meeting buzz has surrounded the menâ€™s 3000m, which has taken on an unusual depth. Two globally-known names familiar to the Boston crowd are Hagos Gebrhiwet, who ran the world junior indoor record here last year before his devastating win in the junior race at the World Cross-Country Championships, and Dejen Gebremeskel, the Olympic silver medallist who won a thrilling duel with Mo Farah here in 2011 after losing his right shoe early in the race.

The two Ethiopians will be joined by Garrett Heath, who knocked off Asbel Kiprop and Kenenisa Bekele in the 4km cross-country race in Edinburgh in January, along with a selection of hungry young talents hoping to be the next Hagos Gebrhiwet. Read more