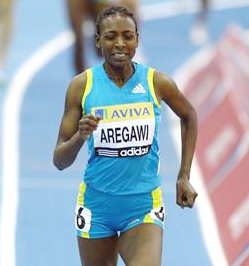 Almost immediately as Abeba Aregawi had finished the 1500m at last yearâ€™s XL-Galan, having missed the world indoor record by an agonising 12 hundredths of a second, she decided to return to theÂ IAAF Indoor PermitÂ meeting in Stockholm on 6 February even more determined to break the mark.

But just a few days ago, Aregawiâ€™s goal changed dramatically as Ethiopiaâ€™s Genzebe Dibaba stormed to 3:55.17 in Karlsruhe, lowering the world indoor record by more than three seconds in one blow.

The magnitude of that performance is best illustrated by the fact that it is faster than any outdoor performance for more than 16 years.

At a press conference on Tuesday, the obvious question for Aregawi was how her plans had been affected by Dibabaâ€™s performance.

â€œOf course it was a great time and it is obvious that she has trained very well,â€ said the world champion. â€œBut so have I, and apart for a couple of weeks with a stomach bug around new year, everything has gone according to plan.

â€œSo my previous ambition still stands, I want to try to challenge the world record on Thursday.â€

Dibabaâ€™s super run in Karlsruhe also changed the face of the womenâ€™s 3000m in Stockholm. Before, it looked to be an exciting dress rehearsal for the IAAF World Indoor Championships next month with Dibaba up against reigning champion Hellen Obiri.

But considering the amazing form Dibaba showed last week, and the fact that last year in Stockholm she missed Meseret Defarâ€™s world indoor 3000m record by less than three seconds, the race on Thursday night could take on another exciting dimension. 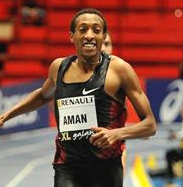 The XL Galan in the Globe Arena was born in 1990 and throughout the years the middle and long-distance races have provided much excitement. This year marks the 25th anniversary of the meeting and it looks to follow that tradition which so far has provided no less than five world indoor records and three world junior indoor records.

In addition to the womenâ€™s 1500m and 3000m, there are exciting line-ups in the menâ€™s 1500m and 800m. In the metric mile, the top five on the current 2014 world season list will be competing, headed by 2011 world silver medallist Silas Kiplagat. The Kenyan will also be up against 2014 Diamond Race Ayanleh Souleiman, African champion Caleb Ndiku and world bronze medallist Johan Cronje.

In the 800m, Ethiopiaâ€™s world champion Mohammed Aman returns to the track where he ran a solo 1:45.05 to top the 2013 world indoor season list. His 600m win in Moscow last Sunday proved his form is at least as good as it was last year. Read more