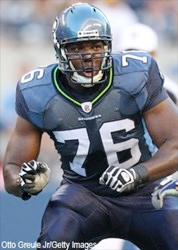 Okung, who is playing in Super Bowl XLVIII, has become a star over the past several years. Believed to be one of the best offensive tackles available in the 2010 NFL Draft, Okong was selected by the Seattle Seahawks as the sixth overall pick, making him the highest Oklahoma State pick since 1989 and the second offensive lineman ever picked from the university in the first round of an NFL Draft. On August 6, 2010 Russell signed a six-year, $58 million contract with the Seahawks including $29 million guaranteed.

UP promises to inspire children and enable them to realize their potential to build a better future through community events, charitable giving, grants and other related programs. Stated goals will allow many positive opportunities for children to foster leadership, academic and social skills and to give back to their community.

UP was created by humanitarian and pro athlete Russell Okung as result of his own personal experience of growing up with and overcoming childhood adversity.

He started the foundation because it was close to his heart, it is geared to single parent households. He was from single-parent household. A lot of NFL players come from that. He supports the families.

â€œWe take care of those kids provide the resources they need to succeed,â€ Okung said. â€œWe have back to school camps and football camps. These kids have no male presence. We addressed environmental needs.”

In this interview, Okung explains how important education is. He said if you do not perform in the classroom, then you should not play football.

â€œI am in the business changing lives,â€ he said. â€œWe have the ability change your community. My foundation will keep on going the rest of my life.â€

The CEO of Simply G Media, G.J. Reynolds,Â said, â€œRussell sees the importance of surrounding yourself with the right people. Russell knows if he provides opportunities for the children.”

You can find out more information on Russell Okung byÂ clicking here. You can listen to the radio interview now by clickingÂ listen here.

Note: Olung’s parents are from Nigeria.