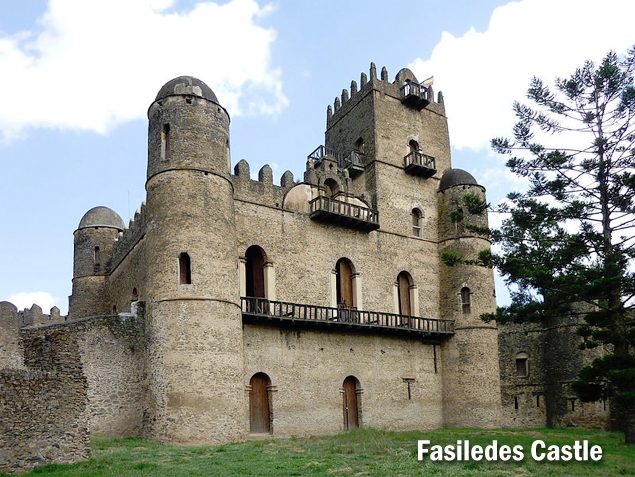 In the month of January, 2014 crew of ranking officials drawn from Ministry of Tourism and Culture(MoTC), House of Federation, senior officials of various associations and reknowned public figures paid a visit to the city of Gondar– a city signified by the historical castle of Atse (emperor) Fasiledes. The main purpose of the trip was to attend the 4th National Cultural Festival organized under the mantra â€œour cultural values and identities to the culture industry.â€ The Festival was organized by the Ethiopian National Cultural Center, MoTC, Amhara Region Culture, Tourism and Parks Development Bureau and Gondar City Administration â€“all collaborated in one to make the week quite a success.

For more than a week, Gondar turned to be like a little Ethiopia hosting people from all regional governments, all of which showcasing distinct cultural heritages that was depicted by diversified language, costume, songs and dances, among others.

One of the major events of the week was the visit paid to Alemseged Atse Fasiledes Castle, or in short Atse Fasil Castle. Even if the place is named after Atse Fasiledes, there are six various castles (including Atse Fasil Castle) built in the compound covering a total area of 70 thousand square meters of land. The name is given to Atse Fasiledes because he took the lion share in the construction of the castles and relics still visible today.

Gondar served as the third major capital city and seat of the dynasty next to Axum and Lalibela for over 250 years. With the assistance of a young tourist guide, a member of tourist guide association in Godar, many of the delegates learnt the true history of the palaces, nuts and bolts and conspicuous ideas about the castles and bizarre civilization that Gondar had before the era of princes, a.k.a the dark ages.

Next to the front gate of the compound is found the first palace established by Atse Fasil , a ground plus two storey building, a well preserved edifice compared with the other aging palaces. Atse Fasiledes reigned from 1632-1667. Apart from this Castle, the emperor has also erected a library; a meticulously structured house that the books and parchments kept would be maintained safely. To ensure the safety of the books and parchments from weather effect, the house had false windows with in the wall so that the difference in the thickness of the walls could regulate air condition in the library.

Though today the library is empty and having nothing to display inside, according to the tourist guide, there were once over 4000 precious books and parchments and some of which were sealed with gold. The contents of the books were diversified; ranging from philosophy and religion to astronomy and medicine. All of these treasures were looted and are still available in many of the great European Museums, according to the tourist guide.

Looting of these precious national heritages had already begun by the time the great navigator James Bruce (the man who came to discover the source of the Blue Nile) stayed in Gondar in cameo. Bruce is said to have stayed in Gondar longer than his prior schedules. He did learn Geâ€™ez language. The tourist guide doesnâ€™t agree with the idea that the purpose of Bruceâ€™s navigation was just to discover the source of the Blue Nile. â€œHe came to Gondar, a place located far from the Blue Nile flow rout, for some other motives which were concealed at the time. In the first place, learning Geâ€™ez has nothing to do with discovering the source of the Blue Nile. Had his motives were to communicate with the local people, he would have studied Amharic instead of Geeâ€™z,â€ the young man argues. There is also a strong belief in Gondar that it is James Bruce who stole the Book of Enok (Henok in Geeâ€™z) from the Fasil library. This book was among the original biblical records, the type of which was not found anywhere else in the world.

Next to the Library, you find the Sauna and Steam bath of the emperor and other high ranking members of the dynasty. The water boiling room and the pipes used to transfer vapor are still visible. There were also many rhino horns put in row on the wall at the entrance which were used to put royal costumes of the emperorâ€™s family on; before they go inside the bath. They were also stolen. Nobody knows how and when. Today, they are replaced by oxen horns. Atse Fasil has also established a swimming pool outside the compound located at few kilometers from the castle. This place is now used to celebrate Timket (Ethiopian Epiphany) every year. It is a magnificent work of art.

The other five palaces were built by various successors (sons and grandsons) of Emperor Fasiledes. Atse Yohannes I, the son of Fasiledes erected a beautiful castle which is still in a good shape. The other one was erected by Atse Eyasu, son of Atse Yohannes and grandson of the great Atse Fasiledes. Atse Eyasu reigned from 1682-1706. Historical records indicate that both Atse Yohannes I and his son Atse Eyasu spent their older years in Monasteries before they die. The other Castle was constructed by Atse Dawit (from 1716-1721). And the palace was called Adbar Seged Dawit Deball wall. The other one was erected by Atse Bakafa. Atse Bakafaâ€™s castle does have a U turn shape and hence is a bit different. This structure was known as wehni Amba, where members of the royal family who were believed to be threat to the throne was kept in treason. Atse Bakafa was known for his respect to handicraftsmen and he encouraged them to work and do well for their country.

Last but not least is the Etege (Empress) Â This palace is now under careful renovation because there are signs of cracks in the wall. Empress Mintiwab has also constructed a beautiful church known as Qusquam. She had put over 1000 golden treasures, materials made silver and Zinc in Qusquam. The church still does have many precious treasures worth visiting to people coming to Gondar.

The Compound also had lion gates. Lions have been kept in palaces as the symbol of power and grace to Ethiopian kings for thousand years until the last emperor of Ethiopia (Haile Sellassie I). Ethiopian kings were (or at least believed to be) â€˜decedentsâ€™ of the great king Solomon of biblical times. To sum up, all the palaces in the compound were built from more or less the same material but with different architectural designs. There are some foreign allegations that these castles were not built by Ethiopian architects. The people of Gondar, however, donâ€™t have the slightest doubt that these master pieces are purely the brainchild of Ethiopians at the time. The young tourist guide even gives a name called Gebrekiristos, to be the architect of the Atse Fasiledes Castle.

On the contrary, there are some street beggars spending the night in the green fenced areas outside the compound, leaning on the wall, which should be given due attention; because the surrounding wall is also a precious treasure like the rest of the castles inside.