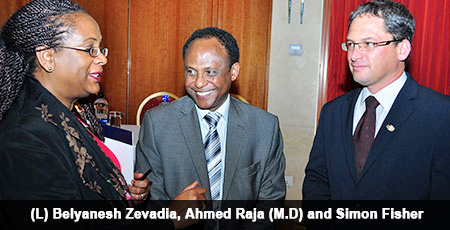 Addis Ababa, Ethiopia – Five Ethiopian children with heart problems will be taken to Wolfson Medical Center in Israel for open heart surgery within the next few months. These children will be the first of 75 other cardiac patients to receive treatment from Save a Childâ€™s Heart Foundation (SACH), an Israeli NGO, in 2014.

These children are able to travel to Israel for the treatment they need thanks toÂ  a memorandum of understanding (MOU) signed between Addis Ababa University, College of Health Sciences- Black Lion Hospital (AAU-BLH) and SACH on January 22, 2014 at the Hilton Hotel.

Ahmed Raja (M.D), Chief Executive Director of College of Health Sciences signed for AAU and Simon Fisher, for Save a Childâ€™s Heart Foundation of which he is Executive Director. The MOU was witnessed by Abraham Haileamlak (M.D), Pediatric Cardiologist and Dean of the College of Public Health and Medical Sciences at Jimma University Hospital.Â

As part of the MOU, SACH will give medical training to three Ethiopian pediatric cardiologists and one cardiac care physician. The foundation is also giving training to a surgeon according to Jeff Hoffman, (M.D.) CEO of Danya International, Inc.

Also present at the signing were Belyanesh Zevadia, ambassador of Israel to Ethiopia, and Yared Wolde, a former beneficiary of Save a Childâ€™s Heart Foundation. Yared, who isÂ  now all grown up, has opened his own school where he helps 156 children who are unable to pay for their education.

â€œI am one of the lucky ones,â€ he pronounced. â€œFifteen years ago, I needed a valve replacement. Both my parents were dead and I was just an 11 year old street kid. I kept going to Black Lion Hospital daily hoping for a cure. Most doctors in this country donâ€™t care about their patients. Then one day I met Dr. Belay, founder of Save a Childâ€™s Heart Foundation,â€

Yared was sent to Israel by the foundation with two other children who were 8 and 10. He got the surgery he needed in three months and came back to Ethiopia.

â€œI am no longer scared of anything. All the fear was leached out of me when I was 11,â€ he said in closing. â€œI am not scared of telling my opinion to anyone. I think we have a big problem with healthcare in this country but we also have a big opportunity. It is time for us to wake up and do something.â€

In the past 15 years, 300 Ethiopian pediatric patients were sent to Israel to get treatment, with assistance from Ethiopian Airlines who will also cover partial payment of the new childrenâ€™s flights to Israel. The foundation has helped around 3,300 patients in 48 countries since its beginning, according to Hoffman.