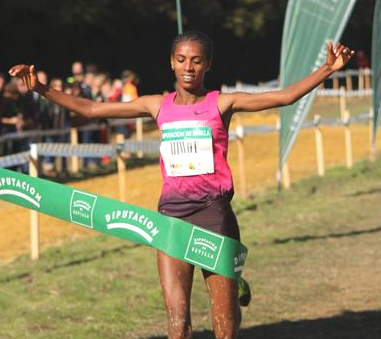 However, both 23-year-olds succeeded in different ways. World cross-country silver medallist Ayalew was tucked behind Kenyaâ€™s world 5000m silver medallist Mercy Cherono throughout the race before unleashing her final attack 800m before the finish

By contrast, world 10,000m bronze medallist Tanui secured a memorable win as he led from the gun and was never headed to finally destroy the stiff challenge of Ugandaâ€™s Timothy Toroitichâ€™s over the final kilometre.

The womenâ€™s 8km contest opened conservatively with Spainâ€™s Sonia Bejarano leading the early stages at a moderate pace. Last yearâ€™s winner Mercy Cherono stepped up the pace with the clock reading seven minutes only to be followed by the Ethiopian trio of Hiwot Ayalew, Alemitu Heroye and Trias Gebre plus Great Britainâ€™s Lily Partridge, fresh from a creditable seventh at the Edinburgh Great Cross Country last week. Further back, Spainâ€™s Diana Martin led the chasing group.

The leading groupâ€™s picture remained the same for much of the race with Cherono â€“ eager to bounce back from her fourth-place finish in Elgoibar â€“ always to the fore, the Ethiopisn trio in the middle of the pack and the Briton closing the quintet.

Coming from behind, a brave Martin was about to join the leaders as she ran barely four seconds in arrears by midway, but shortly afterwards Cherono injected a brisker rhythm to leave behind Gebre and Partridge before the sixth kilometre.

By the bell, with 2.2km left, Cherono, Ayalew and world junior cross-country bronze medallist Heroye forged three seconds ahead of Gebre and Partridge, but the gap soon increased as Cherono pushed hard with Ayalew and Heroye always close behind.

The long-legged Ayalew first took charge of the race some 1.3km home, Heroye quickly covered her with Cherono now in third but the Kenyan soon seemed to be in trouble and lost ground over the final kilometre.

As had been the case the previous week, Ayalew broke away with ease from her talented fellow Ethiopian to clinch an unopposed five-second win from Heroye with Cherono another eight seconds adrift.

â€œItâ€™s marvellous having this string of victories,â€ said Ayalew, the first Ethiopian winner since Gelete Burka in 2007. â€œItâ€™s my fifth success in a row; I hadnâ€™t ever had so many wins in a row at an international level.â€