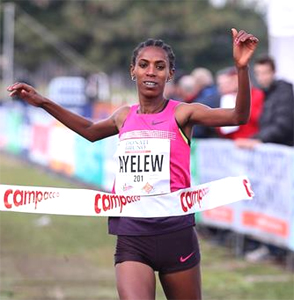 The 32ndCross Internacional de Italica in Santiponce on the outskirts of the Spanish city of Sevilla, anÃ‚Â IAAF Cross Country Permit Meeting, will see UgandaÃ¢â‚¬â„¢s Timothy Toroitich and EthiopiaÃ¢â‚¬â„¢s Hiwot Ayalew start as favourites on Sunday (19).

The pair won the famous, and high quality, race in the Basque town of Elgoibar last Sunday and will be looking to maintain their momentum.

This pair proved to be in stellar form last Sunday when they came in first and second in Elgoibar, comfortably ahead of a couple of quality Kenyans, Magadalene Masai and Mercy Cherono.

In addition, the in-form 23-year-old Ethiopian should be eager to make the Italica podium for the first time as she had to settle for the fourth place on her only previous appearance here, two years ago.

The two other Ethiopians on the start line will be the Spain-based Rehima Jewar and Trihas Gebre.

Cherono, the 2013 IAAF World Championships 5000m silver medallist, will have a tough task to maintain the Kenyan supremacy after six years of winning the womenÃ¢â‚¬â„¢s race in Santiponce, she could improve on her two previous outings this winter, a third spot in Atapuerca and a fourth place in Elgoibar. Read more