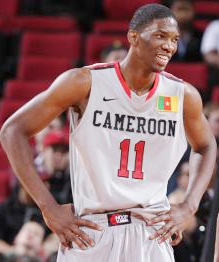 Joel Embiid grew up in Cameroon, in west Africa, preferring soccer and volleyball. He first played organized basketball at 16, as a high school junior after moving to the United States. Teammates at a Florida prep school initially laughed from one Embiid hoops pratfall to the next.

He is 19 now. He has gone from 6-foot-9 to 7-foot, from comedy routine on the junior varsity to mega-recruit as a high school senior. This season, Embiid has progressed from life as one of the other Kansas freshmen — walking into Lawrence a few steps behind prodigy Andrew Wiggins — to something much more. Jayhawks coach Bill Self recently told theÃ‚Â Kansas City StarÃ‚Â that Embiid is “a young Hakeem Olajuwon.”

Most players improve during college. Many catapult from relative obscurity to high in the lottery. But rarely does it happen like this. Embiid could be the No. 1 pick in June’s NBA Draft because he really hasn’t had much of a basketball past at all. Ã‚Â Read full story in NBA.com