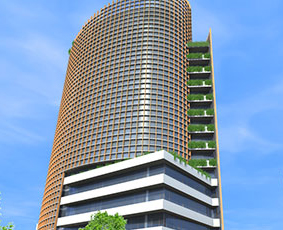 Addis Ababa, Ethiopia –Ã‚Â Nib Insurance Corporation(NIC) selected four finalists toÃ‚Â  design their headquarters, which will include a branch for itsÃ¢â‚¬â„¢ sister company , Nib International Bank, on Africa Avenue next to Mega Printing House. The four finalists were chosen by impartial judges in the architecture and financial sectors. The three runner-ups were given monetary prizes and one was awarded first prize, according to the BankÃ¢â‚¬â„¢s PR office. The prizes, however, were undisclosed.

Nib Insurance was founded on May 2, 2002, by 818 shareholders, withÃ‚Â  30 million Br in paid-up capital. Before the NIC, Nib International Bank (NIB) was established on 26 May 1999 and started giving service on October, 1999. It had a paid up capital of 999.4 million birr and a total capital of 1.7 billion birr as of the last fiscal year.

Only time will tell if the shareholders of Nib Insurance will have similar misgivings about their headquarters, when the design and construction cost of the building is revealed in the coming months.