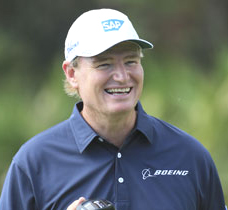 The four-time major champion will use a variety of the company’s produce and wear the logo on his bag and on his headwear. Els has won three majors with different equipment companies: Lynx (1994 U.S. Open), TaylorMade (1997 U.S. Open and 2002 British Open) and Callaway (2012 British Open).

Adams Golf was acquired in 2012 by TaylorMade-adidas, so the 44-year-old South African could be using different products throughout his bag. Els last month signed a footwear deal with Ecco to wear its street shoes.