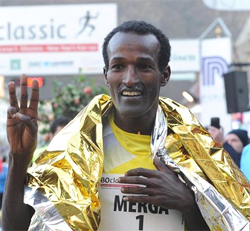 In an exciting head-to-head battle over the final 300 metres, the 2011 IAAF World Cross Country Championships gold medallist prevailed by the unofficial margin of 0.1 although both men were given the same time of 28:44.

“I am very proud to have won for the third time. This is a very special victory because Kiprop gave me a hard time,” reflected Merga, who also won in 2011.

MoroccoÃ¢â‚¬â„¢s Aziz Lahbabi, third in the 2010 IAAF World Junior Championships 5000m Championship, made much of the early pace and was rewarded for his bravery with third place in 29:00.

KenyaÃ¢â‚¬â„¢s Edwin Soi, a four-time BOclassic winner and the fastest man in the world over 5000m in 2013, was not in his best form and down in seventh place on this occasion.

“It was not easy because Cherono is at the longer distances, one of the best in the world but hen I pulled away 300 metres before the finish, I knew I was going to win. It is my first time in Bozen and it was a great event; the atmosphere was unique,” commented a smiling Jamal.

EthiopiaÃ¢â‚¬â„¢s Afera Godfray and Worknesh Degefa, first and second at the Corrida de Houilles in France two days ago, finished third and fourth in the BoClassic women’s race.