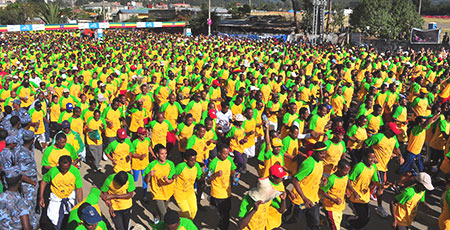 Addis Ababa, Ethiopia – Amid tight security, an estimated 30,000 runners finished the 13thÂ edition of the Great Ethiopian Run that was staged on a new and harder course.

Tsegaye Atsedu and Netsanet Gudeta became the new champions of the 10km run staged in the northern part of Addis Ababa on Sunday 24th November.

The change in start/finish location from its traditional venue in Meskel Square had been forced upon the organisers as a result of ongoing road and rail construction work in the city.

Tsegaye won in a time of 29:21, the slowest winning time here since Gebremariam won in 2002. But his time belied the strength of his victory, as he fought hard over the second part of the course to claw back a 10m deficit over a hilly section of the route between 6km and 9km.

A group of 11 passed halfway in 13:38 after which point the leading pack was gradually whittled down to 5 by 6km and 3 by 7km. At this point Boston Marathon champ Lelisa Desisa started to struggle. The final three kilometres were covered in 9:31 compared with the opening 3km of 8:18, and turned into a war of attrition, as Tsegaye took back the lead just before the 9km point as he headed back up the final hill past Menelik Hospital and along the edge of Jan Meda.

Tsegaye came home four seconds clear of Adugna Tekele with Hunegnaw Mesfin a further 3 seconds back. Ã¢â‚¬Å“This gives me more confidenceÃ¢â‚¬Â said the winner after the race. Ã¢â‚¬Å“IÃ¢â‚¬â„¢m happy to win and I know now IÃ¢â‚¬â„¢m in good shape.Ã¢â‚¬Â

In the women’s race Netsanet Gudeta ran a clever tactical race which saw her overhaul long-time race leader Atsede Bayissa at the 7km point. Bayissa stormed through the first 5km in 15:08 but could only manage 18:42 over the race second half. Gudeta’s splits were 15:20 and 18:03.

Gudeta who hails from the small town of Bekoji which has produced the likes of Kenenisa Bekele, Derartu Tulu and Tirunesh Dibaba, only requested a start number on the day before the race, confident that her good form from her recent Coca Cola Series win in Addis Ababa in September could continue.

Her manager Gabriela Nicola commented about her victory: if you look at the former champions of this race, you can see how big a victory this is for her.Â Indeed, last year’s champion here Aberu Kebede is a member of Gudeta training group which also includes Aselefech Mergia, Sule Utura and Koreni Jelila.

Gudeta will now prepare for the New Delhi Half Marathon on 15 December.

Further back the first Kenyan to finish was Hilary Kipkemoi in 30:52, while Spanish 3000 steeplechase national record holder Luis Miguel was the first foreigner to finish in 35:40.