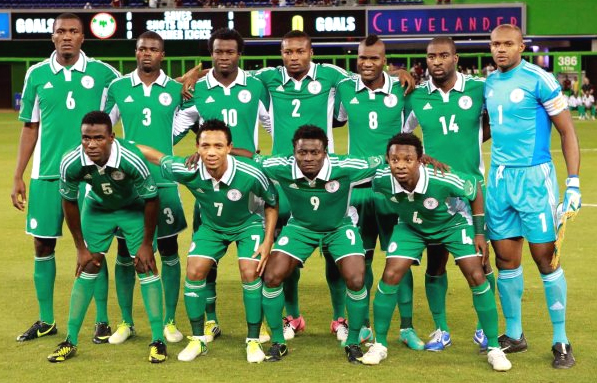 Super Eagles of Nigeria take on the Walya Antelopes of Ethiopia at home on Saturday in the second leg of the 2014 World Cup playoff in Calabar. The Nigerians, seeking a fifth appearance at the greatest showpiece on earth, take a 2-1 away win from last month in Addis Abba into the Calabar game.

Ethiopians have said they will challenge the Nigerians and in football, anything is possible hence no quarter would be asked and none would be given when both teams would meet in the final decider at the Super Eagles’ talismanic home ground of U.J Esuene Stadium in Calabar where they remained unbeaten.

Though Nigeria have not lost at home in the FIFA World Cup preliminary tournament since October 10, 1981 when they were beaten 2-0 by Algeria in Lagos, Coach Stephen Keshi said he was not oblivious of the threat posed by the Ethiopians despite the fact that they would need at least a 2-0 win to upstage the apple cart.

“We have not qualified (for the 2014 World Cup) but on the verge of doing so and we must not let down our guards at the crucial moment ” warned Keshi during the week.”Ethiopia are still a threat despite losing 2-1 at home because they are a very good side and have been together for up to five years.”

The recent two matches between both teams have been fierce and the Super Eagles had to dig into their rich experience to snatch victories. While Victor Moses scored two penalties to see off the Ethiopians at the 2013 AFCON in South Africa, it was also a brace from Emmanuel Emenike that helped Super Eagles secure a 2-1 win during the first leg of the 2014 World Cup final play-off last October.

“The game in Calabar will be tougher for us than the one in Addis Abba(in Ethiopia) and we have to be careful and get ready for another big business in Calabar,” noted Emenike, the 2013 AFCON top marksman.

Indeed the Super Eagles cannot avoid to falter following clarion calls by Nigerians from home and abroad that the senior national team must take a cue from the national Under-17 team, the Golden Eaglets who conquered the world with victory at the just concluded FIFA champions in the UAE.

” The game against Ethiopia would be interesting but it is not a question about Nigeria winning, it is a question of how convincing the Super Eagles,” noted former Nigerian international, Nduka Ugbade who scored one of the goals when the Super Eagles thrashed the Ethiopians 6-0 in Lagos in a qualifier for the 1994 African Cup of Nations(AFCON).

Similarly, Daily Independent, a National Newspaper, was even more forthcoming in its recent editorial:” The challenge before the Super Eagles in Calabar is not only to properly defeat Walya Antelopes,but endeavour to correct all the lapses that unfolded during the first leg of the Ethiopia- Nigeria match in order to prevent them from reoccurring during the second leg in Calabar.”

It is such near-convincing style that has long cast shadow on the ability of the Super Eagles in recent times fuelling the optimism of veteran Ethiopian coach Sewnet Bishaw of a possible upset in Calabar.

” We have to bear in mind that they got the 2-1 advantage in the first leg after we did not close down space they rarely got in the 90 minutes,” said Bishaw who reportedly tipped experienced striker Getaneh Kedebe who missed the first leg due to injury as one of his key players.”In any case, we are ready to challenge them until the end.”

Ethiopia would also be counting on Saladin Said Ahmed who scored four goals for the Walya Antelopes along with Kebede in the group stage.