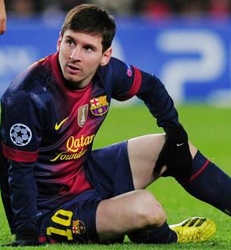 Barcelona forward Lionel Messi will be out for between six and eight weeks with a hamstring injury, the La Liga leaders said on Monday.

The Argentine suffered a muscle tear in his left hamstring during Barca’s 4-1 La Liga win at Real Betis on Sunday.

The World Player of the Year was substituted during the first half after pulling up following a sprint for possession. It was his 16th game of the season in which he has scored 14 goals.

It was also the third thigh injury of the season for a player renowned under former Barcelona coach Pep Guardiola for his ability to avoid injury, despite being the focal point of Barcelona’s famed tiki-taka, one-touch football.

Barcelona said on their website the first stage of Messi’s recovery would be in the Catalan city before he travelled to Buenos Aires.

The 26-year-old will miss the final two matches in the Champions League group stage for Barcelona, against Ajax Amsterdam and Celtic. Barca have already qualified for the last 16 which takes place in late February.

Barcelona lead La Liga by three points from Atletico Madrid and six from arch-rivals Real Madrid. Barca are due to play Atletico in Madrid on January 12 but have games against lesser opponents before then.