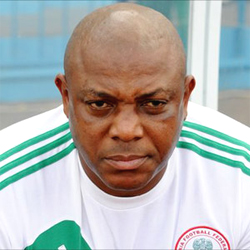 Super Eagles head coach, Stephen Keshi has invited 25 players to prosecute the World Cup play-offs reverse fixture against Walya Antelopes of Ethiopia as well as the friendly tie against Italy in London.

Keshi called back brilliant young defender, Kenneth Omeruo, a key component of his 2013 Africa Cup of Nations winning squad as well as the rugged and attack-minded midfielder, Reuben Gabriel.

Both men were out injured for months. Omeruo dislocated a troubled shoulder at the Fifa Confederations Cup in Brazil in the summer while Gabriel will be happy to be fully fit after sitting on the bench all through the Africa Cup of Nations campaign.

Eagles lead the Walya Antelopes 2-1 from the first leg in Addis Ababa on October 13.

All the players are expected in Calabar on Monday, November, 11.