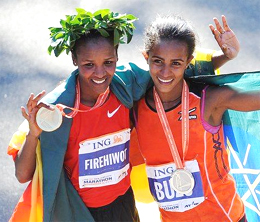 New York, USA -Ã‚Â While the men may have a wide variety of potential victors in Sunday’s New York City Marathon, there is unanimity around the likely pace: fast. The womenÃ¢â‚¬â„¢s field may have fewer potential contenders, but less consensus around the likely strategy.

Kiplagat, herself a New York victor in 2010, may have pride of place in this group. In the oppressive heat of a Moscow summer afternoon, Kiplagat this summer became the only woman to successfully defend a World title in the Marathon. Add to that her sub-2:20 credentials as a runner-up in London in spring 2012, and Kiplagat clearly has all the tools needed to succeed in New York. The open question is whether she will have fully recovered from the challenging conditions in Moscow.

Or, whether she has the speed of her countrywoman Jeptoo. The 29-year-old has a 2:20:14 PB from winning the London Marathon this spring, but can also claim to have defeated both Tirunesh Dibaba and Meseret Defar in the same race, the Great North Run Half-marathon earlier this autumn. 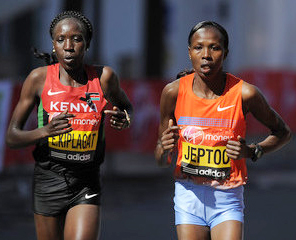 Jeptoo has never finished outside of the top three in the eight Marathons she has contested to date, but her weakness may be the New York course, with its bridges, turns, and rolling closing miles.

Dado and Deba, part of the same training group in Ethiopia before Deba came to the USA, know about Kenyans with fast credentials. The pair watched Mary Keitany set out on a blistering, almost suicidal early pace in 2011 and then return to sight somewhat the worse for wear. Despite uneven records in the two years since their doubles act in New York, they both claimed high confidence for 2013 in a press conference on Wednesday, and Deba, who lives and trains in the Bronx, still hopes to be the first New York City resident since the 1970s to win the New York City Marathon.

In 2012 New York, struggling with the aftermath of a storm which flooded much of lower Manhattan and caused damage some neighbourhoods have yet to be able to repair, wasnÃ¢â‚¬â„¢t ready for a major sporting event on its streets, and became the first of a bruising series of bad-news Marathons. Now, in 2013, the collected talent and intrigue of both fields promises to put the good news back in the lead, and make another start at repairing a little more of the stormÃ¢â‚¬â„¢s damage. Read full story here