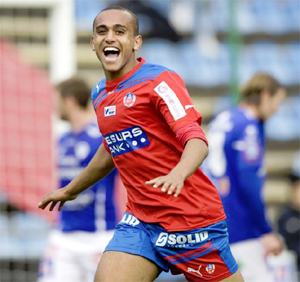 Swedish based Walid Atta has expressed his desire to play for his motherland Ethiopia after declining to play for Sweden at the senior level.

WalidÃ¢â‚¬â„¢s Father comes from Adi Bara in Eritrea and his Mother from Haweza in North Ethiopia and both migrated to Sweden . Walid himself was born in Riyadh,Saudi Arabia in 1986.

Atta’s professional career begun in early 2008 when he joined AIK in Stockholm Sweden. During his engagement with AIK (for 3 years) he gained a lot of experience in all aspects of professionalism as a football player.

“Throughout these years I became a key player and performed very well in many games in the league as well as in some International games as well. These three successful years became my key to the Swedish U21 national team and generated many offers from international clubs, like Glasgow Rangers in Scotland, Valencienne in France and Dinamo Zagreb from Croatia just to name a few.”

“After consulting with my family and my agent I decided to sign up for Dinamo Zagreb in Croatia. However the journey was marred with injuries and the club not being able to pay playersÃ¢â‚¬â„¢ salaries forced me to transfer. “Walid Ata told supersport.com

“I later signed up for top Swedish side Helsingborg where I was voted player of the year after scoring seven goals in the Europa Cup against teams like Levante and Hanover 96 .I have been following the Ethiopian National team at Afcon and the WCup qualifications and I am so impressed and proud how they are progressing. They just keep getting better and better and it looks good and promising for Ethiopian football in future and hopefully I can be a part of that and contribute to an even greater success. That would be a fantastic honor for me “Walid added.