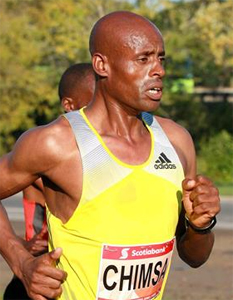 In the end it was pre-race favourite and 2012 World Half Marathon silver medallist Deressa Chimsa of Ethiopia who prevailed, crossing the line in 2:07:05 to beat the former record by 53 seconds.

The 26-year-old always looked fluid, even as the eight-man pack Ã¢â‚¬â€œ which passed halfway in 1:03:15 Ã¢â‚¬â€œ began to disintegrate. Under clear skies and with temperatures hovering around 10Ã‚Â°C, there was early optimism for a fast time.

By 30km the three dedicated pacemakers had dropped out, leaving Chimsa, his compatriot Habtamu Assefa and KenyaÃ¢â‚¬â„¢s Solomon Kiptoo alone to face the oncoming westerly wind.

Kiptoo surged, covering two consecutive kilometres in less than three minutes each and that was the end of Assefa. But Chimsa could not be dissuaded. The barrel-chested Ethiopian Ã¢â‚¬â€œ who went under 2:07 three times in 2012, recording a personal best of 2:05:42 in Dubai a year ago Ã¢â‚¬â€œ simply responded in the unkindest way possible. He himself surged going up a gradual climb and put distance between himself and Kiptoo.

Of his move at 36km, Chimsa was rather casual in his assessment.

Ã¢â‚¬Å“I just saw his (Kiptoo) condition and I left him,Ã¢â‚¬Â he revealed through an interpreter. Ã¢â‚¬Å“I felt confident when I followed him that I could go with him and I could beat him.Ã¢â‚¬Â

Around the 37km mark the course took a series of sharp turns made necessary by the city of Toronto on-going construction projects. Kiptoo soon lost sight of his rival and slowed down considerably. He was rewarded with second place in 2:09:03 and $12,000 prize money.

Ã¢â‚¬Å“The roads were smooth, I didn’t mind the course and I had no problems. I feel happy today.Ã¢â‚¬Â

ChimsaÃ¢â‚¬â„¢s training partner, Sahle Warga, the defending champion, faded to seventh in 2:16:03 after complaining of a pain in his hip.