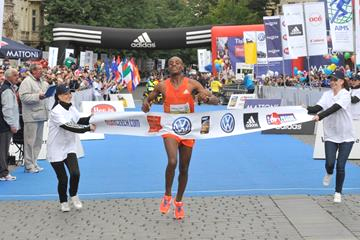 The $35,000 course record bonus at the Scotiabank Toronto Waterfront Marathon has proven to be a popular discussion point among Ethiopian runners these days as Deressa Chimsa is the latest of his countrymen to enter theÃ‚Â IAAF Silver Label Road Race.

The race is set for 20 October and features no less than three athletes who have run faster than Kenneth MungaraÃ¢â‚¬â„¢s 2010 course record of 2:07:58 with another handful within a minute of that standard. The depth is something that has race organisers delighted as the race quickly approaches.

Chimsa ran a spectacular 2:05:42 at the 2012 Dubai Marathon and has broken 2:08 five times in the past three years. He is one of only two men in history to have broken 2:07 three times in one season, the other being this yearÃ¢â‚¬â„¢s London Marathon winner, Tsegaye Kebede.

Two weeks ago ChimsaÃ¢â‚¬â„¢s training partner, Seboka Tola, was forced to withdraw from the Toronto race due to an injury and Chimsa was only too pleased to step into the spot. The pair train with the Demadonna Athletics Group under coaches Gebeyehu Berihun and Gemedu Dedefo. Read more