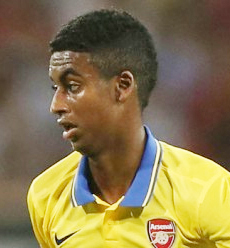 Arsenal central midfielder Gedion Zelalem would be welcomed with open arms if he chooses to play for his parents’ country of birth Ethiopia.

Zelalem, 16, is eligible to play for Germany and the United States as well as Ethiopia.

“Hi Gedion. Good to hear from you. We hope you will play for Ethiopia soon,” Foreign Minister Tedros AdhanomÃ‚Â tweeted the teenager on Sunday.

Tedros’ post was a response to a tweet from Zelalem saying “Still proud” after the ‘Walyas’, named after an Ethiopian antelope, lost 2-1 to Nigeria in a World Cup qualifier in Addis Ababa.

The loss all but ended Ethiopia’s chances of sealing a spot at next year’s World Cup after a campaign that has been lauded as a fairy tale run by a team comprising mainly domestic players.

Walyas’ coach Sewnet Bishaw told Reuters he would not contact Zelalem personally but added: “If he decides to play for Ethiopia and asks us, then things will be easy.”

Some Arsenal fans have labelled him the “new Fabregas” after the Spaniard Cesc Fabregas who transferred from the Premier League club to Barcelona.