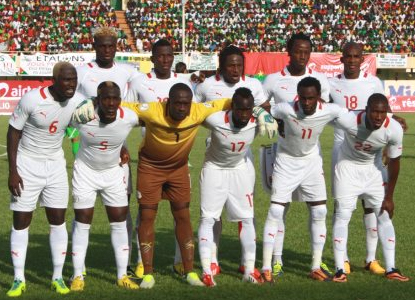 Aristide Bance converted a disputed late penalty to give Burkina Faso a 3-2 home win over Algeria Saturday in the first leg of a World Cup Africa play-off.

Essaid Belkalem appeared to have his arms behind his body when the ball struck him four minutes from time in Ouagadougou. But a Zambian assistant referee insisted it was a hand-ball and Bance made up for having an earlier spot-kick saved.

Algeria host Burkina Faso on November 19 in the return match and the overall winners qualify for the 2014 World Cup in Brazil.

The home team suffered an early blow when defender Bakary Kone was forced to retire with a thigh injury and Steeve Yago came on.

A free-kick tapped to Bance offered the giant striker a sight of goal, but his rising shot offered no danger in clear, hot conditions.

Algeria settled quicker and mounted numerous attacks without seriously threatening to score at a near-full 40,000-seat Stade du 4 Aout. Burkina Faso seemed nervous with one corner so over-hit by captain Charles Kabore that it went out of play on the far touchline.

The ‘Stallions’ then carved open the Algerian defence with clever, short passes only for a vital one inside the box to go astray. But as the opening half passed the half hour, 2013 Africa Cup of Nations star Jonathan Pitroipa began to stamp his authority on a game needing a lift. He won a penalty as the first half drew to a close when Belkalem from English second-tier club Watford floored him with a wild tackle.

But Adi Mbolhi, who appeared to move off his line too soon, dived left to make a two-hand save from a hard Bance kick.

However, the Burkinabe did take the lead two minutes into stoppage time as Pitroipa met a Jean-Noel Lingani cross and his header landed in the far corner.

Algeria began the second half strongly and were level on 50 minutes when Sofiane Feghouli fired past Daouda Diakite from close range after Islam Slimani set him up. The cagey play of the early stages had given way to more adventurous football from both teams and Burkina Faso and Algeria scored again within fiveÃ‚Â  minutes.

Djakaridja Kone put the ‘Stallions’ ahead once more by powering forward from midfield and firing wide of Mbolhi into the far corner.

But a flying Carl Medjani header off a corner gave Diakite no chance and the teams remained level until Bance atoned for his earlier penalty miss.