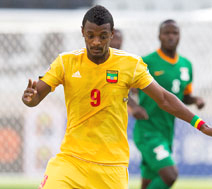 Addis Ababa, Ethiopia – Injured Ethiopian striker Getaneh Kebede Gebito was devastated when it became apparent he would not play against Nigeria in the World Cup play off clash on Sunday.

The top striker who has not been nursing a nagging injury has called on his comrades at Walia to make the country proud by beating the Super Eagles.

Getaneh further reiterated that his absence will be a blessing in disguise as another player will get a chance to shine but hoped to make a quick return from injury.

“The dream of every player is to play a pivotal role for his country. I had hoped to play against Nigeria but unfortunately my injury could not allow. I feel bad I will not be with the team but my prayers are with them. There is nothing strange about Nigeria as I believe Walia will beat them in Addis.”

“I have been urging the players to give 100 percent and believe in themselves as nothing is impossible in football. Every Ethiopian is waiting for the big dream to be fulfilled by qualifying for the most prestigious football tournament that is the World Cup. I know it will not be easy playing against Nigeria but I believe there is light at the end of the tunnel,” a jovial Getaneh told supersport.com.

” I am currently undergoing physiotherapy and also working in the gym but the doctors have assured me I will be soon back playing the game I love. I want to wish my teammates the best of luck against Nigeria who are beatable,” he added.