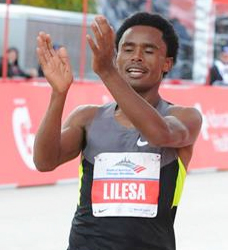 First Patrick Makau ran a World record at the BMW Berlin Marathon when he clocked 2:03:38. Then Wilson Kipsang took the BMW Frankfurt Marathon, going agonisingly close to MakauÃ¢â‚¬â„¢s mark as the Kenyan missed out by just four seconds. Will there be a repeat of the 2011 performances in both of GermanyÃ¢â‚¬â„¢s top autumn Marathons?

Last Sunday Berlin made its contribution when Kipsang finally broke the World record with 2:03:23. Today the organisers of the BMW Frankfurt Marathon added a number of world-class runners to their impressive menÃ¢â‚¬â„¢s elite field plus two exciting Marathon talents.

There are now five runners with PBs quicker than 2:05:30 on the start list for the race on 27 October. So strong is the field, it might even give cause for concern to the newly-crowned World record-holder Kipsang.

The participation of Kenyans Vincent Kipruto (2:05:13) and former Frankfurt course record-holder Gilbert Kirwa (2:06:14) had already been announced by the organisers. But the latest additions to the entry list mean that Kipruto and Kirwa are now the third and seventh-fastest men in the field.

In contrast to Sefir, Lilesa has more experience and achieved a number of notable performances despite being two years younger. In 2010 he ran 2:05:23 to finish fourth in Rotterdam, becoming the youngest runner ever to break 2:06.

Lilesa was also the bronze medallist in the Marathon at the 2011 World Championships and this year took fourth place in the star-studded London Marathon in 2:07:46. He was among the favourites at this yearÃ¢â‚¬â„¢s World Championships in Moscow, but dropped out mid-race. A fast time in Frankfurt will go some way towards making amends for that.

Two runners return to the Frankfurt Marathon having set personal bests in a memorable race there two years ago. Levy Matebo was second in 2:05:16 while fellow Kenyan Albert Matebor took third in 2:05:25.

The other promising Marathon talent in the field is Moses Masai. After an unspectacular debut of 2:11:00 at this yearÃ¢â‚¬â„¢s Dubai Marathon, the 27-year-old could be set for a breakthrough in the Marathon.