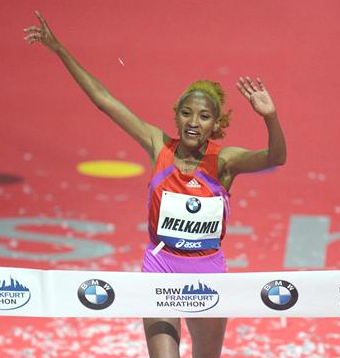 Defending champion Meselech Melkamu will return to the scene of her triumph last year when she runs the BMW FrankfurtÃ‚Â Marathon on 27 October,Ã‚Â an IAAF Gold Label Road Race, the organisers announced on Monday (23).

The Ethiopian produced the third fastest Marathon debut ever by a woman when setting a course record of 2:21:01 in 2012.

Melkamu, 28, is the second fastest 10,000m runner of all-time and holds the African record at the distance.

After a great career on the track and also at cross country, she is now concentrating on the Marathon.

Ã¢â‚¬Å“In the future I want to run times in the Marathon that are as good as the ones IÃ¢â‚¬â„¢ve achieved in the 10,000m,Ã¢â‚¬Â said Melkamu, after last yearÃ¢â‚¬â„¢s race

After her winning debut at the 2012 BMW Frankfurt Marathon 2012, she finished fifth in this yearÃ¢â‚¬â„¢s London Marathon and gained selection for the IAAF World Championships in August.

In sweltering conditions in Moscow, Melkamu was in the leading group until the final stages of the race but suffered muscle problems late in the race and dropped out at around 37km.

Ã¢â‚¬Å“Our information is that she recovered quickly from the Moscow race. Meselech was able to train without problems on the days after she had dropped out. It was after that when she decided to run another Marathon this year and come back to the BMW Frankfurt Marathon,Ã¢â‚¬Â said Christoph Kopp, who is in charge of the elite athletes in Frankfurt.

He added: Ã¢â‚¬Å“Meslech intends to defend her title and she wants to run a fast time.Ã¢â‚¬Â

A very quick time and possibly a course record might well be needed for victory. Besides Melkamu, there are three other runners in the field who have personal bests of under 2:22.

EthiopiaÃ¢â‚¬â„¢s Tirfi Tsegaye is the second fastest in the field behind Meselech Melkamu with a best of 2:21:19, from the 2012 Berlin Marathon. This year, Tsegaye won the Dubai Marathon in January with 2:23:23 and was then fifth in Boston in 2:28:09.

Another world class runner to be taken into account is KenyaÃ¢â‚¬â„¢s Caroline Kilel, who will return to the BMW Frankfurt Marathon where she won three years ago in 2:23:25. The following year she set what remains her personal best with victory at the 2011 Boston Marathon in 2:22:36.

The organisers expect around 15,000 athletes to take part in the 32ndedition of the BMW FrankfurtÃ‚Â Marathon.

JÃƒÂ¶rg Wenig (organisers) for the IAAF