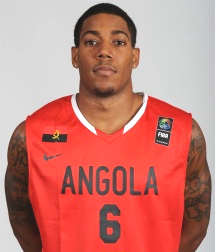 Africans are indeed breaking into the National Basketball Association League and this always serve as motivation to the young African Basketball talents in the continent. After Luol Deng and Pops Mensah Bonsu, the new kid to make Arica proud in Basketball is Angolan shooting guard Carlos Morais .

NBA team, Toronto Raptors has finally sign Carlos Morais for this season. Morais was an influential player for Angola in the current FIBA Africa championship and was named the tournament’s Most Valuable Player. He averaged 15.9 points and 4.6 rebounds in seven contests for Angola and scored a team-best 21 points during the championship game versus Egypt.

With all these experience, there is no doubt that Morais will be a chap to watch out in this season’s NBA league for his new club Toronto Raptors.