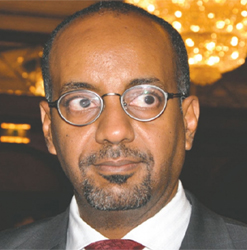 Addis Ababa, Ethiopia – Since his appointment on January 10, 2012, Admassu Y. Tadesse has been serving as the president of the Eastern and Southern African Trade & Development Bank, aka the Preferential Trade Area (PTA) Bank, of the Common Market for Eastern & Southern Africa (COMESA). A father of two from his wife Anna Getaneh Ã¢â‚¬â€œ an international model active in Ethiopian charity work Ã¢â‚¬â€œ Admassu chairs the PTA, which was established in 1985. In this interview with Binyam Alemayehu, EDITOR-IN-CHIEF, AdmassuÃ‚Â  shares his views about the last 18 months under his leadership, the expanding the geographical horizon of the PTA and the new partnerships with Ethiopian businesses. Excerpts.

Fortune: It has now been a year and a half since you took your position in the PTA. One of the responsibilities you assumed at the time was developingÃ‚Â  the PTAÃ¢â‚¬â„¢s five-year corporate development plan. This was meant to take the Bank to a new height.

Admassu Tadesse: It has indeed been an exciting 18 months. We have undertaken the very exciting process of developing the strategy and plan for the next five years of the Bank. The plan was launched in January this year. It has a number of cornerstones. The first thing is to ensure that the momentum is maintained.

Q: Are you pleased with the BankÃ¢â‚¬â„¢s performance against the plan so far?

In fact, the first thing I did when I took this position was to make sure that the results of my first year were outstanding. This is because during transitions there are typical institutional elements that come into play. I was determined to make sure that the transition was as smooth as it could possibly be. I clearly set out my targets, including Ã¢â‚¬â€œ penetrating new markets, developing new products, ensuring that the Bank began to recover much of the written off loans that I found were off the books, but believed I could bring back to the Bank.

The staff and the management rose up to the occasion and we closed our first year with record results; 35pc year-on-year growth on the balance sheet, which is the highest that the Bank has ever produced. Profitability on a year-to-year basis has increased by 51pc. That is well above the growth of the balance sheet.

Part of that success was driven by record levels of new recoveries, some of which were written off seven, eight or nine years ago. We found new ways of clawing back all that capital, in order to make sure that the shareholders remain happy.

Even though my mind was very much on the plan and the new strategy, I also understood that success needed a lot of rethinking, a lot of new initiatives, a lot of mobilisation of new shareholders and expanding the geographic mandate of the Bank to other areas. That was my long-term and medium-term agenda; but, I knew that I would be in two minds at the same time. Read more