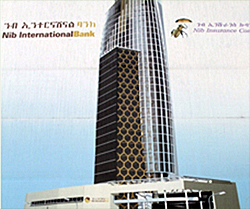 Addis Ababa, Ethiopia -Ã‚Â Nib International Bank (NIB) and Nib Insurance Company signed an agreement with a Chinese construction firm China Railway No.3 for the construction of the first phase of a 35-storey building that will host both the insurance and bank as their headquarters.

This represents the vision the two companies had when they first started and it marks a big step forward that they have taken to accomplish that vision by working tirelessly, it was stated at the signing ceremony.

The headquarters will be built on a 3,682 square meter plot secured from the Addis Ababa City Administration and is located behind the National Theater which is often called the financial hub of the country.

Ã¢â‚¬Å“I cannot disclose how much will be invested in the construction of the building, but we will be able to give out that information in due course,Ã¢â‚¬Â said Kibru Fondja, who was officially announced as the new president of the bank at ThursdayÃ¢â‚¬â„¢s signing ceremony.

It is two years since the design for the HQ was completed and announced Ã¢â‚¬â€œ however, officials of the bank and insurance company claim that the delay in the commencement of construction was because their request for more land from the Addis Ababa City Administration was pending. The Administration has now approved their request for an additional 882 square meters. Ã¢â‚¬Å“The time it will take to build the HQ will depend on the contractor, but we hope and would be very happy if it can be accomplished within three years,Ã¢â‚¬Â Kibru said.

The construction will be completed in two phases.

Ã¢â‚¬Å“We are yet to announce a bid for the second phase of the construction. We havenÃ¢â‚¬â„¢t set the exact time for that,Ã¢â‚¬Â he said.
The two financial institutions also plan to construct other edifices in major regional towns of the country in the near future.