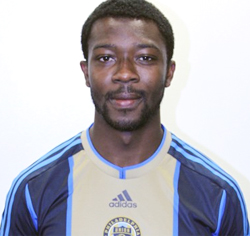 CHESTER, Pa. Ã¢â‚¬â€œ Before stepping onto the field last Saturday, Philadelphia Union midfielderÃ‚Â Michael LahoudÃ‚Â looked down at the FIFA emblem and World Cup qualifying patch on his Sierra Leone jersey and got chills.

The game against Equatorial Guinea had no actual World Cup implications and Lahoud would end upÃ‚Â playing only 15 minutes in a 3-2 win, but for the Union midfielder, those 15 minutes were extremely special.

Not only because they represented his first-ever international cap, but also because they culminated what was an unlikely and emotional homecoming.

After 21 years, Lahoud finally returned to Sierra Leone, a country he escaped with his family as a frightened 6-year-old boy at the beginning of a civil war that would ravage the West African nation for more than a decade.

Ã¢â‚¬Å“It was an emotionally exhausting trip,Ã¢â‚¬Â Lahoud said this week, after rejoining the Union. Ã¢â‚¬Å“Even now, IÃ¢â‚¬â„¢m just visibly exhausted and just recovering emotionally from seeing family, from seeing childhood friends I had lost contact with for so many years and still recognizing people and having certain memories come back. It was pretty special.Ã¢â‚¬Â Read more