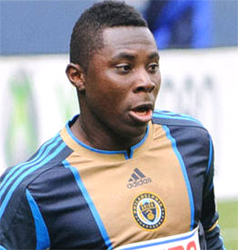 Adu, who finalized the agreement on Monday, has signed with Esporte Clube Bahia, a Brazilian club, and the Union, in turn, acquired veteran Brazilian midfielder Jose Kleberson on loan from the same team.

Kleberson, 33, was on Brazil’s winning team in the 2002 World Cup, and has appeared in 32 matches for his country.

Adu, 23, came to Philadelphia in August 2011 under former coach Peter Nowak. Adu made 35 appearances for the Union, scoring seven times with two assists.

”We would like to thank Freddy Adu for his service to the Union over the past two years,” Philadelphia team manager John Hackworth said, ”and wish him the best of luck as he continues his career in Brazil.”