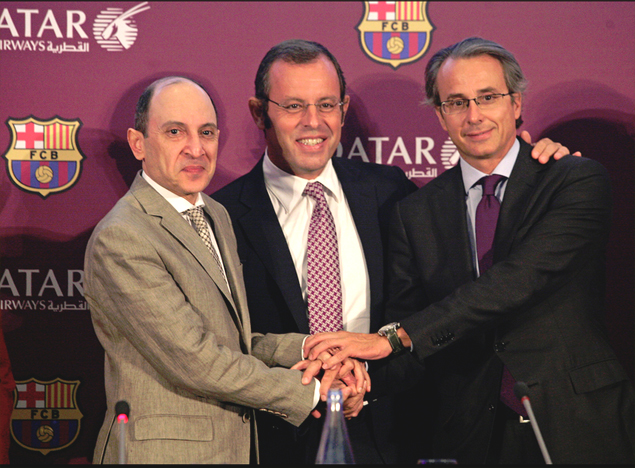 Ã¢â‚¬Å“A Team That Unites The WorldÃ¢â‚¬Â Will Guide The Spirit Of The Partnership.

The airlineÃ¢â‚¬â„¢s partnership with FCB took effect from July 1st this year.

Akbar Al Baker made the following remarks at the start of his address to the media during a press conference: Ã¢â‚¬Å“The joining of FCB and Qatar Airways is truly history in the making. It is the first time we enter into such a landmark, significant sports partnership.

Ã¢â‚¬Å“We understand the importance of FCB to Catalonia, to Spain, and in fact Ã¢â‚¬â€œ to every country around the world. It is a great honour to be standing side by side as you create and spread the excitement that this great game of football brings to fans.Ã¢â‚¬Â

Al Baker also spoke about the airlineÃ¢â‚¬â„¢s expansive communications campaign about the partnership that will cover various elements: Ã¢â‚¬Å“our aim with this new campaign is to show to the world how strongly we stand behind this new partnership, which we will share with passengers across our entire network.”

He further described the partnership as Ã¢â‚¬Å“a fitting match for both organisations that share the same values: the pursuit of excellence, passion, pride and culture.

The airline CEO added: Ã¢â‚¬Å“This partnership will also raise Qatar Airways and FC Barcelona to a new platform internationally, bringing the fans of FCB closer together.

The State of QatarÃ¢â‚¬â„¢s national carrier, Qatar Airways began operating to Spain in December 2005 and currently flies 10-times-weekly to Barcelona and daily to Madrid.

FC Barcelona football club President Sandro Rosell said:
“We have a long journey ahead lasting three years in which we will share experiences, with a common starting point and goals. BarÃƒÂ§a and Qatar Airways are united by many ideals, such as a passion to be better each day, the conviction that the human factor makes a difference and the integration of different cultures, but I would emphasize the desire we have to connect with people. And this desire leads us to want to be every day closer to our fans.”

The new sports kit was first showcased during the Asia Tour earlier this month when the team travelled to Kuala Lumpur and Bangkok to play friendly matches in preparation for the upcoming season.

The fans reunited with the team with great glory and the stands were filled with absolute excitement to have the likes of big players from FC Barcelona squad.

Since its beginnings, FC Barcelona has been characterised by being not just a football organisation, but also a powerful force for globalisation, solidarity, integration and social cohesion. Qatar Airways fully identifies with these values, which is why this partnership between both organisations is much more than just a simple economic alliance. Furthermore, Qatar AirwaysÃ¢â‚¬â„¢ partnership with FC Barcelona will help to position the airline in the world.

Qatar Airways will work with FC Barcelona to create joint initiatives and will especially focus on connecting with the clubÃ¢â‚¬â„¢s fans and also with underprivileged children to spread the love of the game to all corners of the globe.

Flying to 129 leisure and business destinations Qatar Airways is one of the fastest growing airlines in the world.

Over the next few weeks and months, the network will expand with the addition of further destinations Chengdu, China (September 3), Addis Ababa, Ethiopia (September 18), Clark International Airport, Philippines (October 27) and Philadelphia, USA (2 April 2014).

Qatar Airways was presented with three honours at the annual Skytrax 2013 World Airline Awards held during the Paris Air Show at Le Bourget, France in June. The airline was awarded WorldÃ¢â‚¬â„¢s Best Business Class, WorldÃ¢â‚¬â„¢s Best Business Class Lounge and, for the second consecutive year, Best Airline Staff Service in the Middle East. The airline has also been named Best Airline in the Middle East for the seventh year in a row, and its Premium Terminal at Doha International Airport named Best Premium Service Airport for the third consecutive year in 2013. Qatar Airways has also twice been recipient of the prestigious Skytrax Airline of the Year Award in 2011 and 2012.

Skytrax is the only global independent passenger survey monitoring airline standards and is considered the ultimate benchmark for excellence in the airline industry.

Qatar Airways currently has orders worth over US$50 billion for more than 250 aircraft, including Boeing 787s, 777s, Airbus A350s, A380s and A320 family of aircraft. Qatar Airways will become the first of the major Gulf carriers to join a global alliance having been invited into the oneworld group. For more information, visitÃ‚Â www.qatarairways.com