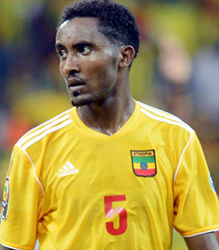 Spending more than ten million birr for the renewal of the contracts of eight players and signing bonuses for 13 new recruits, head coach Mekonnen G/Yohannes is boasting of making a side strong enough to push for the league title against St. George, Dedebit and Ethiopian Coffee.

A veteran in the National team that steered Ethiopia back in to the Africa Nations Cup final after 31 years, Aynalem is expected to lead Dashen Brewery to a new horizons.

St. George is rumored to have paid National team attacking midfielder Minyahel Teshome one million birr for his move from Dedebit FC.

The dribbler Minyahel could become the first player to win three Premier League titles (Ethiopian Coffee, Dedebit) if he can help St. George reclaim the crown in the new season.

The visionary midfielder, overshadowed by the lucky ones, was praised by no one, except by a few football fans, but even so, National team head coach Sewnet Bishaw called him up for National team duty in his latest squad.