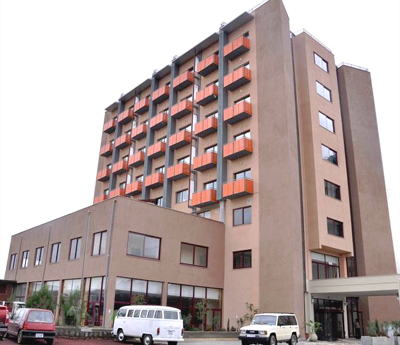 Addis Ababa, Ethiopia – The four star Kenenisa Hotel, which cost 200 million birr ($10 million) to build, was officially opened for business on Sunday. The construction of the eight-storey hotel situated near the Bole Medhanialem Cathedral was launched five years back.

Ã¢â‚¬Å“Lying on an area of 1,400 square metres, the hotel has 51 rooms. So far, it has created job opportunities for over 100 citizens,Ã¢â‚¬Â says Hotel Manager Roman Tafesework. She also said that inauguration ceremony was held in a simple and brief manner attended by families, friends and some media executives.

According to the Manager, the rooms have modern air conditioning, fire extinguisher, smoke detector, and other systems that go along with its standard. It was also noted that the hotel has a meeting hall, high speed Internet service, fitness and business centres.

Two times Olympic Champion owner Kenenisa Bekele said: Ã¢â‚¬Å“The construction of this hotel has taken five years which were full of ups and downs.Ã¢â‚¬Â He said the bureaucratic red-tape and ethical problem on the part of some contractors were challenges he faced during its construction. Kenenisa told reporters that he is engaged in different businesses, such as hotel, cinema, shops, resort, sports complex and the like.