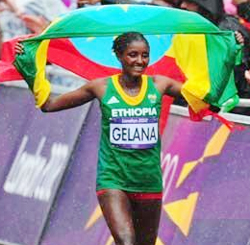 By Mike RowbottomÃ‚Â at the Luzhniki Stadium in Moscow

August 14 – Olympic champion Tiki Gelana and this year’s Boston Marathon runner-up Meseret Hailu – along with their local agents – have reportedly been asked by the Ethiopian Athletics Federation (EAF) to submit written explanations for what caused them to drop out of Saturday’s (August 10) World Championship race just after the five kilometre point.

Aberu Kebede was the only finisher for Ethiopia, placing 13th, with Meselech Melkamu and Feyse Tadese dropping out after the 35km mark in Moscow, according toÃ‚Â sportsnewsarena.com.

The EAF’s emergency committee held a meeting chaired by the President Alebachew Nigussie on Sunday (August 11) in Moscow and agreed that the runners would not be cleared to race in any competitions until their response had been received.

The EAF reportedly feel the two marathoners may have dropped out to save themselves for big city marathons.

The race was won byÃ‚Â Kenya’s Edna Kiplagat for the second consecutive Championships.