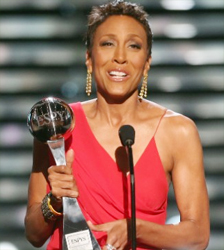 Robin Roberts wanted to be a sports journalist in an era when women, let alone women of color, weren’t seen in that role.

But, as the “Good Morning America” co-anchor told the audience at the ESPY awards Wednesday, she doesn’t let fear stop her.

The inspirational media figure was honored with the Arthur Ashe Courage award, a recognition given to someone who reflects “strength in the face of adversity, courage in the face of peril, and the willingness to stand up for their beliefs no matter what the cost.”

Roberts, who was radiant in a red gown, graciously accepted the award with a speech that has become one of the night’s most memorable moments.

“I realize there are many worthy of holding this honor. Others who have exhibited far more courage, strength and resilience,” Roberts said. “It’s humbling for me to represent you tonight. I draw strength from you. You give me the courage to face down any challenge, to know that when fear knocks, to let faith answer the door.”

Roberts has been a living example of that philosophy as she’s faced two life-threatening health problems. The sports journalist and broadcaster was diagnosed with breast cancer in 2007, andÃ‚Â then with a rare blood disorderÃ‚Â called myelodysplastic syndrome in 2012.

After receiving a bone marrow transplant with the aid of her sister Sally Ann,Roberts was able to recover and return to “GMA,”Ã‚Â stronger than ever.

“Those of us who are fortunate to have overcome some form of illness or adversity are told that we are strong. I didn’t find that strength on my own,” she said Wednesday. “It was the kind that grew with every kind word of support – every tweet, every email, every phone call. … Through it all, I learned that strength, true strength, isn’t when you face down life’s challenges on your own, it’s when you take them on by accepting the help, faith and love of others and knowing that you are lucky to have those.”

After the ceremony, Roberts tweeted that the ESPYs were “memorable for many reasons,” not the least of which being the graciousness of the athlete who introduced her, LeBron James.