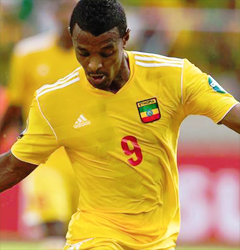 Getaneh Kebede has been linked with a move to the PSL, with a number of clubs, including Wits, keen on assessing the Ethiopian striker.

According to a source close to the player, the 21-year-old has attracted interest from a few clubs following his inspiring performances for his club, Dedebit FC, and the Ethiopian national team.

Ã¢â‚¬Å“My partner in Ethiopia will be arriving in the country with the player very soon. We have been talking to some PSL clubs about him and thereÃ¢â‚¬â„¢s interest,Ã¢â‚¬Â explained the source.

Wits CEO, Jose Ferreira, confirmed to Soccer-Laduma that they will be having a closer look at the striker. Ã¢â‚¬Å“He (Kebede) will be coming to us so that we can have a look, with a view of signing him,Ã¢â‚¬Â said Ferreira.

The Students are looking to bolster their ranks ahead of the 2013/14 season, with Gavin Hunt having taken charge of the helm.