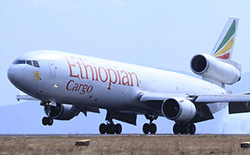 Addis Ababa, Ethiopia –Ã‚Â Ethiopian vegetable and fruit exporters are considering expanding into the South Korean market, with the launch of direct flights to Seoul by Ethiopian Airlines.

The export market for Ethiopian produce is currently limited to Europe and the Middle East, while there is huge demand in other parts of the world.

Direct flights between Addis Ababa and the Korean capital are scheduled to begin tomorrow, Monday 17th of June.

Market experts see it as a great opportunity for Ethiopian exporters.

Ã¢â‚¬Å“Some producers and exporters, have already been preparing for this eventuality,Ã¢â‚¬Â according to one market consultant.

Ethiopian Airlines launched bi-weekly cargo flights to Juba in South Sudan, leading to predictions of a rise in fruit and vegetable exports from Ethiopia.

In the past, exporters were forced to rely on passenger flights with limited cargo space or trucks to reach the South Sudan market.
The Ethiopian government sees horticulture exports as a way of generating foreign currency.

Ethiopian Airlines is expanding its air freight capacity to meet the growing demands of the private sector and is building a cargo storage facility for both dry and perishable goods at a cost of up to USD 200 million.

On 9th March, the airline formally opened a new 75 million birr warehouse, covering almost 4,000 square metres, that is capable of accommodating four aircraft at a time.

The warehouse is next to a building housing customs, security, quarantine and other services for exporters and is intended to make Addis a major international cargo hub.

Tewolde Gebremariam, CEO of Ethiopian Airlines, recently said the airline has ordered four more B777 cargo planes and is finalising plans to build one of the worldÃ¢â‚¬â„¢s largest cargo terminals, with an annual storage capacity of 1.2 million tonnes.