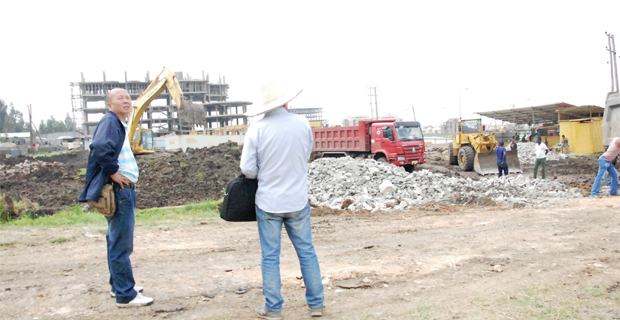 The China Geo-Engineering Corporation (CGC), which has previously been engaged in the road construction sector in Ethiopia, two weeks ago started the construction of an international standard real estate complex, with three billion Birr capital.

The construction is being implemented by Tsehay Real Estate Plc, established by CGC, as a major shareholder a year ago. The excavation work, which goes two metres down, has already begun on the 50,000Sqm plot of land, located around CMC on Asmera Road, leased by the real estate company from the Addis Abeba City Administration.

The Complex, which is scheduled to be completed within two years, contains 21 buildings, a senior manager of Tsehay Real Estate, who remains anonymous, told Fortune. Out of the 21 buildings, four of them will be 15 storey buildings, while the rest will have 12 stories.

“We want to change the existing trend in which the real estate sector is characterised by poor quality and late delivery, by sticking to our deadlines,” said the senior manager.

The real estate sector, which has produced close to 15,000 units of villas and apartments to date, has indeed been riddled with delivery problems.

Amidst the increasing failure to honour contracts, the Addis Abeba City Administration surveyed 125 real estate companies that had leased land in 2010. These firms, which had a total of 550ha of land between them, only had a 14pc compliance rate when measuring construction progress, according to the survey.

Yet, a special law for the sector, which first emerged 15 years ago, had not existed until the first draft was unveiled to stakeholders last year. The much anticipated bill, entitled “Real Estate Development & Marketing Proclamation,  which was presented for consultation six months ago, is designed to discipline unruly real estate developers.

The bill covers issues that include contractual agreements between home buyers and real estate developers, the issuance of licenses, land and space usage and the transfer of finished homes. No homes are to be transferred without 50pc of construction having been completed, the bill suggests.

CGC, which was established in 2005 with 26 million dollars of registered capital, will finance the overall cost of the construction.  Its business, headquartered in Beijing, mainly involves international projects, including drinking water and waste water treatment, irrigation, housing, road and bridge construction, borehole drilling and geological prospecting.

The company is also involved in road construction projects in Ethiopia. In 2012, CGC signed the contract to upgrade the 96Km asphalt Nekempt-Bedele highway, in Oromia Regional State, at a cost of one billion birr.