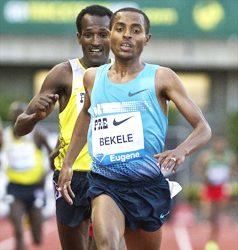 , Oregon (AP). — World record-holder Kenenisa Bekele took the lead heading into the final lap and sprinted to the finish to win the 10,000 meters at the Prefontaine Classic on Friday night.

London Olympic gold medalist Mo Farah withdrew from the race a day earlier because of a stomach bug, instead choosing to run Saturday in the 5,000 in the elite Diamond League meet at Hayward Field.

Farah won gold in both events at the London Games. But he decided to skip the 10,000 in Eugene to run the shorter distance with training partner Galen Rupp. While Farah is British and Rupp is American, the two have become close pals, training under Alberto Salazar. Read more