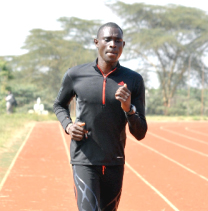 World record-holder David Rudisha is eager to lead a world-class 800m field on June 1 at the Prefontaine Classic, where he will take on all seven of the other Olympic finalists from last year.

Rudisha, the 2012 Olympic gold medallist, is no stranger to racing the best in the world, having broken the 1:41 barrier in his London victory against them. But competing in Eugene will be his first chance to display his incredible talent at the historic Hayward Field.

The Kenyan superstar recognises the significance of the event. “I’ve heard about the great crowd at Eugene. Bernard Lagat tells me it’s where they have a special interest in middle distances,” said the 24-year-old, whose appearance in Eugene will be just his second ever race in the US, following his victory in New York last year. “So I’m excited to go and run there for the first time. I hope to run well and give the crowd something to enjoy.”

When Rudisha runs, crowds enjoy. His talent in the 800m is at historical levels, as he now owns six of the eight fastest times in history, including his world record 1:40.91 set when winning the Olympic title in London.

Rudisha’s confirmation makes for a phenomenal Pre Classic field, as every 2012 Olympic finalist is confirmed. This also makes the men’s 800m the fifth of five events announced by the Pre Classic that will include every medallist from the London Olympics. Read more