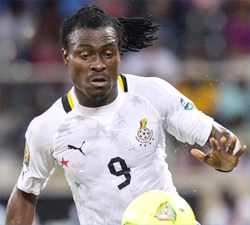 Ghana midfielder Derek Boateng has announced he has completed his move to English Premier League side Fulham from Ukrainian club Dnipro.

The 30-year-old wrote onÃ‚Â his Twitter account:Ã‚Â Ã‚Â “I have signed a two-year deal with Fulham FC! I’m happy to see this deal confirmed!

“Thanks God, my family and everyone who support me!”

Boateng also posted a picture of himself holding a Fulham shirt at the club’s Motspur Park training ground,

Fulham have yet to officially confirm the deal but it appears the former Getafe, Cologne and Beitar Jerusalem man has become the club’s second signing of the summer after right-back Sascha Riether agreed a permanent deal following his successful loan spell.

Manager Martin Jol had been trying to sign Boateng for some time but contract disputes between the player and his club had prevented the transfer from going through.