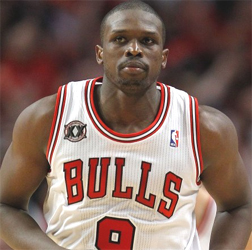 DEERFIELD, Ill. (AP) –Ã‚Â Chicago Bulls forward Luol Deng made it clear Friday on Twitter that the illness that kept him out of a playoff game against the Brooklyn Nets was far more serious than the flu.

He missed the Bulls’ loss in Game 6 on Thursday with what coach Tom Thibodeau said were flu-like symptoms.

In one of a series of tweets from the hospital, Deng wrote: “It really upsets me that everyone thinks I would miss a game” because of the flu.

He also confirmed he had a spinal tap to rule out meningitis earlier in the week. And he indicated he will join the team for Game 7 in Brooklyn if he’s medically cleared, although he might have to spend the night in the hospital.

The Bulls are in danger of losing this first-round series after taking a 3-1 lead, and they were really short-handed on Thursday, with Kirk Hinrich sidelined by a bruised left calf and Nate Robinson and Taj Gibson playing through what the team said were flu-like symptoms.

Deng insisted his illness was more serious than that.

He wrote that he was taken to the emergency room on Wednesday and required to take the spinal tap “in order to play on Thursday.” He said the procedure left him with the “worst headache I’ve ever experienced.”

He said he was unable to get out of bed on Thursday but somehow made it to the United Center before being sent home. The symptoms worsened Friday morning, and he was back at the emergency room.

“I want my teammates and Bulls fans to know I would NEVER miss a game bc of flu,” he tweeted.

Deng had his toughness questioned during the 2008-09 season when he missed the final 22 games and then the playoffs with what turned out to be a stress fracture in his right tibia.

But he led the league in minutes per game the past two seasons even though he’s been banged up at times. He tore a ligament in his left wrist last season in a game against Charlotte in late January but played through it, missing just nine games because of the injury and opting for rehab rather than surgery.