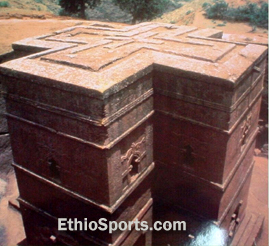 The Ethiopian Authority for Research and Conservation of Cultural Heritage (ARCCH) has announced a newÃ‚Â heritageÃ‚Â project for a region of northern Ethiopia in an attempt to preserve a sacred pilgrimage site.

The project will aim to preserve the structures of 11 monolithic World-Heritage listed churches built in the 12thÃ‚Â and 13thÃ‚Â centuries by King Lalibela. The region has become an important pilgrimage destination for locals and tourists. The region of Lalibela is deeply connected to Ethiopian Christianity and the 11 churches sit near a traditional village in the heart of Ethiopia. The building of the churches were credited to King Lalibela after he set out to construct a Ã¢â‚¬ËœNew JerusalemÃ¢â‚¬â„¢ in the 12thÃ‚Â Century after Christian pilgrimages were prevented from making their way to the Holy Land.

The churches are situated 150 kilometres east of Lake Tana, Ethiopia and theÃ‚Â preservationÃ‚Â project will see their structural integrity reinforced and improved architectural detail on the windows and doors. The finished site will include four free standing churches and seven churches embedded into rock. The site will also be home to the Medhane Alem, the worldÃ¢â‚¬â„¢s largest rock-hewn church building. It contains 72 pillars and is partially underground. There are a number of narrow causeways, steps, passages and tunnels running between the various religious buildings. Read more