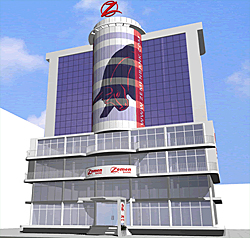 Addis Ababa, Ethiopia – Zemen BankÃ¢â‚¬â„¢s management has distanced itself from alleged risky exposures in relations to creditors and depositors that have recently faced financial and management difficulties.

In a statement it issued today, April 4, 2013, Zemen BankÃ¢â‚¬â„¢s management asserted that the Bank has not been damaged in its relationships neither with Holland Car Plc nor Access Real Estate S.C.

Both companies have lately run into bank run type of problems, whereby they defaulted on deliveries of products to their respective customers who paid in advance.

Holland Car, a pioneer in assembling a large number of automobiles in Ethiopia, has declared bankruptcy after its founder and general manager, Tadesse Tessema, left the country for the Netherlands, without delivering vehicles to over 100 buyers.

Access Real Estate, a 650-shareholder public company established by the same man who spearheaded the formation of Zemen Bank, Ermyas T. Amelga, has also fallen into financial and management difficulties, after the founder left the country for the United States. Over 2,000 home buyers in 19 project sites, have yet to receive villas and condos, for which many have paid in advance.

Both companies have business relationships with the Bank, either as a creditor or depositor. ZemenÃ¢â‚¬â„¢s managers appear to be concerned with the negative publicity these companies have received recently and are reassuring the public that the difficulties with Holland Car Ã¢â‚¬Å“do not risk undermining the BankÃ¢â‚¬â„¢s favourable financial results.Ã¢â‚¬Â

Zemen has announced today, that its capital base has expanded to 400 million Br, 100 million Br short of the paid up capital the central bank wants to see banks meet within a year. The Bank doubled its capital over the past two months, after floating shares to its existing shareholders.

The same is true with its dealings with Access, according to the management which also issued a press statement today.

Ã¢â‚¬Å“Contrary to some misunderstandings, Access Real Estate does not have shares in Zemen Bank or vice versa,Ã¢â‚¬Â Zemen says. Ã¢â‚¬Å“Moreover, although the company maintained an account at the BankÃ¢â‚¬â„¢s Main Branch, Zemen Bank has zero loan exposure to Access Real Estate.Ã¢â‚¬Â