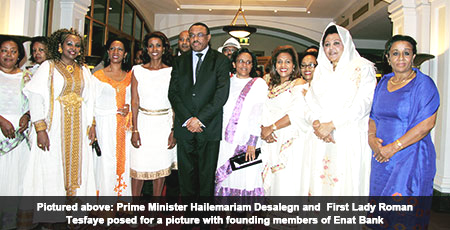 Addis Ababa, Ethiopia -Ã‚Â Enat Bank, the first womenÃ¢â‚¬â„¢s bank in Ethiopia, was officially launched on Tuesday. Initiated by eleven women and with 7200 shareholders, the bank is set up to serve all, but with a special focus on women.

Meaza Ashenafi, Chairperson of the Board of Directors of the bank, said that 64 percent of the shareholders are women. Meaza also said that the Bank has been launched with a paid up capital of 120 million birr and 260 million birr in subscribed capital, to be boosted to 500 million birr in two yearsÃ¢â‚¬â„¢ time.

The bank launched its services with two branches in Bole and Bambis areas in Addis Ababa.

The Chairperson stated that they would expand the bankÃ¢â‚¬â„¢s services by opening other branches in different parts of the country and also by using mobile banking as it has a huge potential to reach all.

Ã¢â‚¬Å“We have launched the bank, the first womenÃ¢â‚¬â„¢s bank in the country; potentially we can be one of the biggest banks in Ethiopia. It is a womenÃ¢â‚¬â„¢s initiative. It was promoted by eleven Ethiopian women and we have over 7,000 shareholders,Ã¢â‚¬Â she said during the opening ceremony.

Speaking at the launching ceremony, Minister of Trade, Mekonnen Manyazewal, said that the bank, initiated by Ethiopian women, would contribute in the development activities of the country.

The bank plans to provide services in a manner that improves citizensÃ¢â‚¬â„¢ saving culture and loan services that promotes investment in the country.

Enat Bank is the last bank to be licensed by the National Bank of Ethiopia (NBE) before the ratification of a directive requiring banks under formation to come up with a minimum of 500 million birr paid up capital.