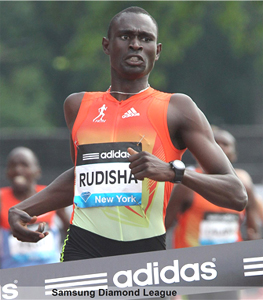 NEW YORK CITY (March 6, 2013) David Rudisha and Jenn Suhr, a pair of 2012 Olympic champions and World Record-holders ranked #1 in the world, are among the first stars set for the 2013 adidas Grand Prix in NYC, organizers announced today.

Each has given fans at Icahn Stadium a performance to remember. Last year, Rudisha ran the fastest 800 meters in history on U.S. soil when he scorched his way to a 1:41.74 victory here; in 2007, Suhr broke her own American Record in the pole vault when she became the first U.S. woman to clear 16 feet.

Joining them will be top Americans Tyson Gay, the three-time World Champion and American Record-holder and the second-fastest man in history at 100 meters who in 2012 won his first Olympic medal, a silver, in the 4×100-meter relay; Michael Tinsley, who won the 2012 Olympic silver medal in the 400-meter hurdles after his surprise win at the Olympic Trials; and Bianca Knight, a 2012 Olympic gold medalist and World Record-holder in the 4×100-meter relay.

The adidas Grand Prix, one of the premier track-and-field events in the world, will kick off the summer on May 25 at Icahn Stadium on Randall’s Island. Tickets for the event are on sale now at www.adidasgrandprix.com or 1-877-849-8722.

Rudisha, one of the most electrifying athletes on the planet, made his U.S. debut at this meet last year with a last lap so dominant that it left fans gasping. To no one’s surprise, the performance turned out to be a preview of his Olympic race, in which the Kenyan megastar broke his own world record by winning gold in 1:40.91. Also the reigning World Champion, Rudisha now holds six of the fastest 10 800-meter times in history.

“Coming to New York was fantastic for me, said Rudisha in his post-race TV interview.

The third stop on the international Samsung Diamond League circuit, the adidas Grand Prix is in its ninth year at Icahn Stadium, in conjunction with the Randall’s Island Sports Alliance. The latest news, photos and information on the event can be found at www.adidasgrandprix.com; on Facebook (http://www.facebook.com/adidasGrandPrix); on Twitter (http://twitter.com/adidasGrandPrix); and on Tumblr (http://adidasGrandPrix.tumblr.com).