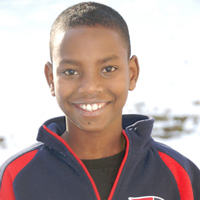 Matiwos (pronounced Ma-tee-YOSE), 7, of Hebron, Conn. and representing the Patriots in the competition, won the category for 6 and 7-year-old boys in the national competition held in Atlanta during the weekend of the NFL Divisional Playoffs. His wide-margin victory came despite an injured hand. Rumley won local and sectional competitions to advance to the New England championship at Gillette Stadium in November, where his scores earned him a trip to Atlanta and the national competition.

MatiwosÃ¢â‚¬â„¢ inspirational story has been documented by theÃ‚Â Hartford CourantÃ‚Â andÃ‚Â NBC Sports. He was adopted by the Rumley family from an Ethiopian orphanage last year, and had never picked up a football until the week before his first PPK competition. His parents attribute his prowess in the competition to the hours of soccer he played daily at the orphanage.

The NFL PUNT, PASS & KICK (PPK) program is a national skills competition for boys and girls between the ages of 6 and 15 to compete separately against their peers. Established in 1961, the PPK program is the oldest NFL Youth Football program.

Girls and boys in five separate age divisions (6-7, 8-9, 10-11, 12-13, and 14-15) compete against each other in punting, passing and place kicking in a fun and engaging forum. The PPK program is free Ã¢â‚¬â€œ both to organizers who host a local competition and to every youngster who wants to participate. With more than three million boys and girls from around the country taking part in PPK competitions every year from July through January, it is one of the world’s largest youth sports participation programs.