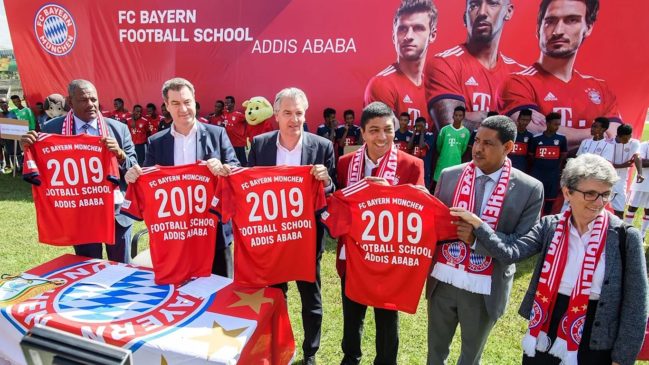 FC Bayern has announced the opening of a new FC Bayern Football School at a media conference in the Ethiopian capital Addis Ababa. The partnership with the responsible Ethiopian Football Association (EFF) includes an ongoing exchange of experience plus the regular presence of youth coaches from FC Bayern to train local players and coaches in Addis Ababa.

Jörg Wacker, FC Bayern executive board member for Internationalisation and Strategy, and FCB Brand ambassador Giovane Elber are accompanying the official delegation of the Bavarian Minister-President Dr. Markus Söder, who is currently visiting Ethiopia: His duties include opening an Africa Office in the city of Addis Ababa with its population of 4.4 million. As part of an FC Bayern under 17 tournament, Wacker signed an agreement at the Yidnekachew Tessema Stadium Addis Ababa. That was followed by a symbolic kick-off of the “FC BAYERN FOOTBALL SCHOOL ADDIS ABABA” in the presence of the Bavarian Minister-President plus representatives of the national football federation and the Ministry of Sport.

Minister President Dr. Markus Söder said: “FC Bayern is one of Bavaria’s biggest attractions. Now, the FC Bayern Football School in Addis Ababa brings together Bavarian expertise in football with a sports-mad nation. That is a good basis for a promising partnership.”

“With the FC Bayern Football School in Addis Ababa we are opening our first football school of this type in Africa,” said Jörg Wacker. “This gives us the opportunity to bring our fans in Africa even closer to FC Bayern and, with the help of our expertise, make an important contribution to the development of football in Ethiopia.”

Following on from USA, China, Thailand, Japan and Singapore, Ethiopia is the sixth country where FC Bayern has established a Football School.