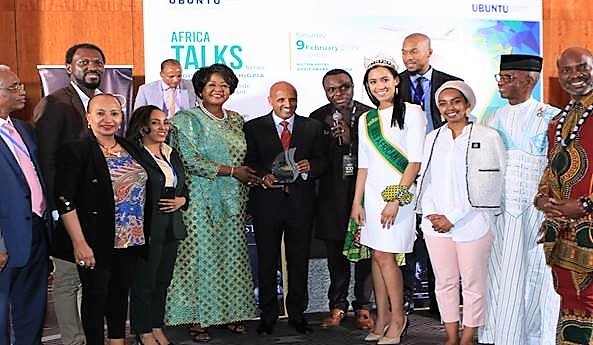 Ethiopian Airlines Group, Africa’s Largest Airline Group and SKYTRAX Certified Four Star Global Airline, is pleased and extends its congratulations to the entire Ethiopian family and the country at large, on the recognition of Mr. Tewolde GebreMariam, Group CEO of Ethiopian Airlines, as one of the most influential people of African descent in the category of business and entrepreneurship at a colourful ceremony held in Addis Ababa on Feb. 09,  2019.

Regarding the recognition, Mr. Tewolde GebereMariam, remarked, “It is an absolute honor to have received this prestigious recognition, an accolade that highlights the contribution of high achievers to Africa. First and foremost, my recognition is a tribute to the hardworking Ethiopian employees, ardent management members , the board and the government of Ethiopia at large.  The award attests the incredibly important role Ethiopian Airlines plays in the integration of Africa through a robust business. I have always taken a great deal of pride that Ethiopian is catalyzing the much needed trade and investment, tourism, and people-to-people relations in the continent and beyond.”

“We, African business leaders, who wield an influence in Africa’s business and economic circles should promote business and entrepreneurship in collaboration with all concerned stakeholders to help ensure sustainability and development, capitalizing on one if the greatest assets of Africa, which is its young, fast-growing, and increasingly urbanized population”, Mr. Tewolde urged.

When cut-throat competition is bound to be the order of the day in the aviation industry, under his leadership, Mr. Tewolde has demonstrated an outstanding strategic thinking and direction in spearheading the strikingly exceptional growth trajectory of Ethiopian and put the airline on global aviation industry ”game changers” map, under a 15-year growth roadmap, Vision 2025, a growth plan what the rest of the world referred as “over ambitios and unattainable growth plan.”

While much has evolved in the industry, Ethiopian has stood the test of time and achieved most of its overarching goals, going halfway through its projected 15 year plan. Ethiopian is now expanding its footprint to under served global destinations and is serving global travelers with its signature Africa’s flavored Ethiopian hospitality on board and in the air. True to form, the airline has also continued pushing the frontiers of aviation technology with the 21st century new generation fleet, among others.

Joining the airline thirty-plus years ago, Mr. Tewolde has passed through the ladders to be at the helm and won a plethora of awards including African CEO of the Year, Best African Business Leader, The Airline Strategy Award for Regional Leadership, the 2015 International Grand Prix Special Award in Milan and the Most Gender Focused CEO Award 2015 by the Leading Women of Africa Group among others.

Ethiopian commands the lion’s share of the Pan-African passenger and cargo network operating the youngest and most modern fleet to more than 119 international passenger and cargo destinations across five continents. Ethiopian fleet includes ultra-modern and environmentally friendly aircraft such as Airbus A350, Boeing 787-8, Boeing 787-9, Boeing 777-300ER, Boeing 777-200LR, Boeing 777-200 Freighter, Bombardier Q-400 double cabin with an average fleet age of five years. In fact, Ethiopian is the first airline in Africa to own and operate these aircraft. Ethiopian is currently implementing a 15-year strategic plan called Vision 2025 that will see it become the leading aviation group in Africa with Six business centers: Ethiopian International Services; Ethiopian Cargo & Logistics Services; Ethiopian MRO Services; Ethiopian Aviation Academy; Ethiopian ADD Hub Ground Services and Ethiopian Airports Services. Ethiopian is a multi-award winning airline registering an average growth of 25% in the past seven years.