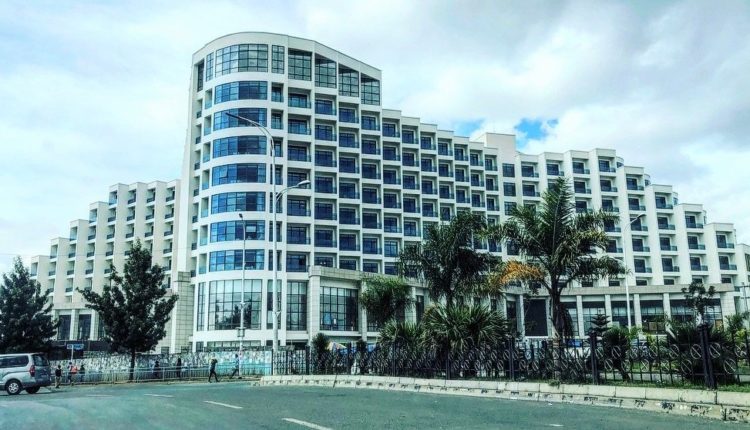 Addis Ababa – Ethiopian Airlines has finalized the construction of a five-star hotel near its headquarters in Addis Ababa. The hotel named Ethiopian Skylight is built at a cost of USD 65 million.

Abraham Tesfaye, Ethiopian Airlines Group Infrastructure Planning and Development manager, told The Reporter that all the civil work has been completed and the hotel is fully furnished. Laying on 42,000sqm of land in front of the Millennium Hall off Africa Avenue, the building has eight floors.

The hotel encompasses a grand ballroom designed to accommodate 2,000 persons convenient for conference and wedding parties. It also has five meeting rooms which can accommodate 20-30 persons.

The hotel has a health center that provides spa, massage and gym services. There is an outdoor swimming pool with a pool bar and mini golf court in the premise. The hotel encompasses a coffee shop, ticket office, and souvenir shop. A large kitchen, laundry and cold room are ready service. The hotel will have a parking lot which can accommodate more than 500 cars.

The Hotel is designed and built by AVIC, a Chinese construction firm, while Sileshi Consult is doing the supervision work.

USD 65 million has been invested for the design, construction and furnishing of the hotel out of which Ethiopian covers 35 percent of the equity financing while EXIM Bank of China provided 65 percent of the project financing.

Abraham told The Reporter that 400 people have been recruited and trained for the grand opening of the hotel slated for January 26. The work force will double when the hotel will be fully operational. “The hotel will provide high end services,” Abraham said. “We are striving to make Addis Ababa the main gate way to Africa. The hotel will play a significant role in boosting the tourism sector and making Addis Ababa a conference hub,” he said.

Ethiopian is exerting effort to make Addis Ababa the most convenient gate way for Chinese travellers. Ethiopian Airlines which was one of the few international airlines to launch flights to Beijing in 1973 today serves four destinations. It has 36 weekly flights between China and Africa and daily transports 3,000 to 4,000 Chinese travellers. The airline has recruited and trained Chinese flight attendants and also deployed Chinese information officers who assist Chinese travellers.

Skylight Hotel will be managed by a Chinese hotel management company called Grand Skylight Hotel Management Co. Ltd (GSHM). The big Chinese restaurant has six separate dining rooms decorated with Chinese costumes. “We want to attract more Chinese travellers and tourists by making Addis Ababa the most Chinese friendly hub in Africa,” Abraham said. “But that does not mean that we will discriminate other travellers,” he added.

The hotel will be inaugurated together with the airport terminal in the presence of Prime Minister Abiy Ahmed (PhD) during the upcoming AU Summit.

Ethiopian is under preparation to launch the second phase of the hotel. The second hotel will be built adjacent to the new hotel on 22000sqm of land. The hotel will have 637 guest rooms and a basement parking which can accommodate 550 cars. The total investment cost of the second hotel is estimated at 150 million dollars. Abraham told The Reporter that currently the design work is being carried out by AVIC which will also build the hotel adding that the ground breaking ceremony will take place in April 2019.

Some of the hotel owners in Addis Ababa are not happy by the decision of Ethiopian Airlines to venture into the hotel business. Abraham said that Ethiopian wanted to build its own hotel not to compete with the existing hotels but it needs to offer its customers a better product and service. “Our airline daily books 400 rooms for its passengers in Addis Ababa. We are not going to book all our transit passengers into Skylight Hotel. If we book 150 of our transit passengers into the new hotel we will take the rest to other hotels,” Abraham said. “We will host our gold and platinum members in Skylight Hotel. We will offer tour packages (air ticket and hotel service) through Ethiopian holidays and bring tourists.”

Abraham said Ethiopian government has plans to make Ethiopia one of the top five tourist destination in Africa and boost the number of tourists visiting the country to ten million. “There is enough market for all of us.”

Ethiopian Airlines has invested USD 550 million on infrastructure development projects in the past five years excluding the airport expansion project.